A Bongbong Marcos Presidency will be Proof Democracy Works, and That’s the Problem
Fuck your “democracy in action” 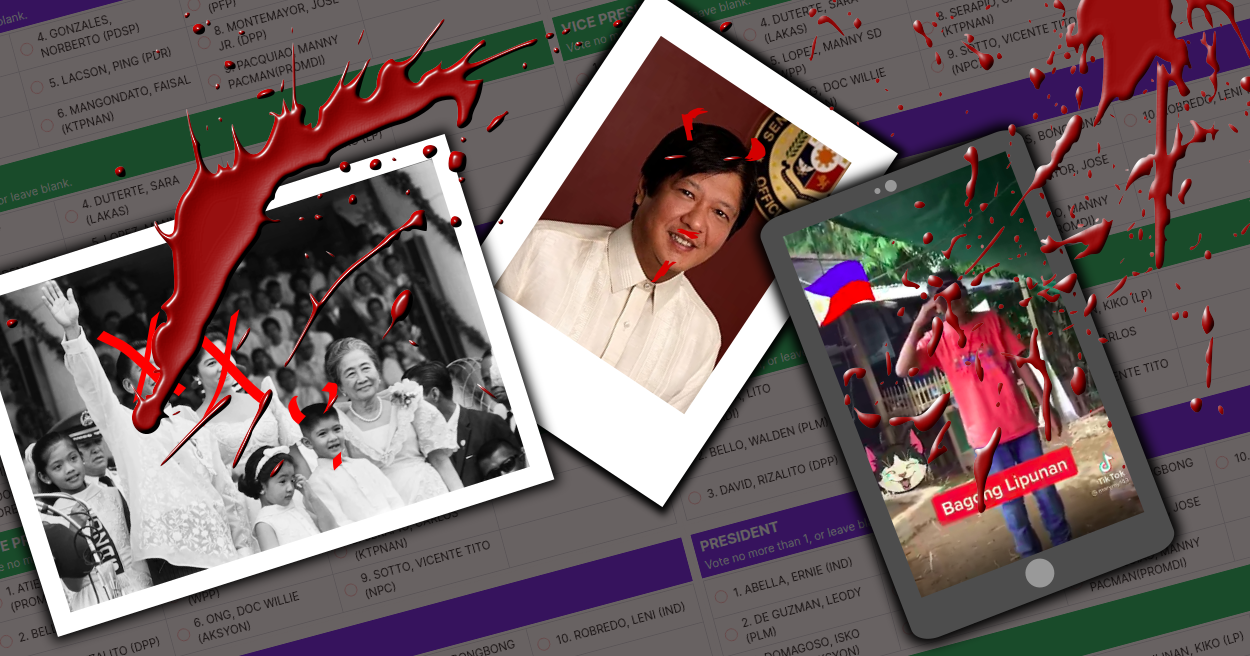 Democracy substitutes social empowerment and popular agency of everyjuan/ita with mere false images of that power vested in representatives. Three hundred years of the false promises of “democracy in action” has led us to this: yet another sickening game of whose images are more compelling in a democratic competition. For to be a voter is to be alienated from our own power, forced to be compelled to one set of images or another. If BBM wins in a legitimate election, it merely means the images he presented was compelling, not that he plans to empower anyone other than himself. If Leni wins, it will be the same, but perhaps with less Marcosian apologia. Remember that Leni went on record on wanting to continue Dutertismo policies “with tweaks.” Real agency and power will never be on the agenda because “democracy in action” is precisely the alienation from our own agency and power.

Several anarchists went on record to urgently call for anarchists to intervene in the elections, whether as tactical or principled voters. But it doesn’t matter if you will tactically vote for Leni or will vote out of principle for Leody, because such a vote is still done within the context of a contest of images. Democracy, especially its liberal-democratic kind, will never result in a world without police, prisons, wage-labor, cisheteropatriarchy, racism, or whatnot. The abolition of this world that dominates will never be on the ballot, for such abolition would already necessarily exclude the existence of voters and the contest of images altogether. Indeed, such a world would mean the abolition of elections as contests of images.

Please, by all means, vote Leni as a means of “harm reduction”—even if voting isn’t actually harm reduction in any meaningful sense. If she wins, she will be anti-communist-in-chief, anti-feminist-in-chief, and most importantly cop-in-chief. Biden is ultimate proof that voting for fake “harm reduction” means nothing. But she will not win. The fact of the matter is that the image she presents is simply not as compelling as the Marcosian image. As several political commentators both anarchist and socialist have already pointed out: a vote against Leni is principally a vote against the EDSA consensus constructed by the liberal opposition at the wake of the People Power Revolution. The image of the EDSA consensus is bankrupt. Not even the Makabayans—the most energetic of the kakampinks—believe in it, what less the everyjuan/ita? And so, Philippine democracy will bring back the Marcos family in power, if only because they were able to buy the images necessary to win them the presidency with the the billions they stole decades ago. Marcos would win because democracy is working exactly as intended.

The presidential campaign of Ka Leody de Guzman got one thing right: that we can project our own images of power, challenge the images of the domineering society, and subvert the images of the domineering society for revolutionary ends. The problem is that the Ka Leody campaign projects this image onto Leody, Walden, and the party. The call for “Manggagawa naman,” “Kalikasan naman,” Babae naman” and among many others merely reflects a popular image of power onto Ka Leody’s campaign rather than signifying power on its own terms. For workers to be first, for ecology to be primary, for women to be the priority necessarily excludes the entire concept of voting for mere images and would mean the end of democracy as we know it.

I could also tear up the ballot or spoil it in other ways, but what does it matter? My vote or non-vote is literally worthless. It literally doesn’t matter. Neither does your vote matter for the significance of an individual ballot is the sophistry of liberal ideology. In truth, your ballot cannot overturn a national election. The instances where individual votes matter in cases where candidates win by the margins are only possible in local elections or in the ridiculous American electoral college system. In either case, your vote only matters if your candidate wins. If your candidate loses, your vote is less than worthless since you are not represented at all. Besides, representation is a false image of power for it makes it seem you have power when in fact the powerful one is the representative. Instead of power and agency, you have a ballot. Instead of choices over your own life, your labor, and your future you have choices of images to pick. This is democracy in action.

In so-called “free and fair” elections, what does matter is the resources to make one image more compelling than others. The image of Bongbong Marcos seems to be most compelling of them all because he bought and stole the resources to make it so. In Philippine elections which are not often “free and fair,” there are three things that matter most: guns, goons, and gold. Not only does Marcos have a more compelling image, but he has guns, goons, and gold to back him up. He can win and it will look like a legitimate election because with a compelling enough image and the discreditation of the EDSA consensus, mass coercion and fraud are wholly unnecessary. There you have democracy working as intended for even the authoritarians play by the rules.

But anarchists and abolitionists are not in the business of making images compelling. Doing so risks diluting the radical practices that we have been doing and will continue to do. We anarchists and abolitionists intervened in the Ka Leody campaign not necessarily because we believed in the image of power he presents, but to agitate, educate, and organize. And so it shall be if and when Marcos wins. Whoever wins, the tasks of the anarchists and abolitionists would be to continue to agitate, educate, and organize, not for mere spectacular images of power, but the social empowerment and popular agency of the everyjuan, everyjuanita, and everyjuanitex. We do not wish to assert our own images of power or the image of power of any socialist party, but to express it for real through mutual aid, collective power, and individual agency. This is the social revolution we work towards. This is the social revolution that will do away with democracy in real terms.